A great collaboration between private and public partnerships took place in the City of Pittsburg when one of their most frequently used bridges collapsed. A Port Authority bus – that weighed 21 tonnes – had unfortunately been in the thick of the tragedy while carrying a full load of passengers. The bus had landed in a precarious position and needed to be moved to enable the crane to lift it to safety.

The first task at hand was to evacuate the passengers. Incredibly, there were no deaths however there were several hospitalisations (three of which were passengers on the bus). Once the passengers were safely evacuated from the bus, the recovery process could begin.

It goes to say that a job this big requires meticulous planning. It was decided that a crane was needed to lift the bus off the bridge, however, the bus had landed 26 meters below where the crane would be. So, this first lift was going to be the hardest part of the job.

Luckily, the heavy recovery team at McGann & Chester stepped in to help. They arrived at the bridge with their 90-tonne rotator and instantly got in on the planning of the rescue mission. The group decided the bus had to be moved to a safer position before the crane could lift it. This is where their expertise came into play.

They were going to use their 90-tonne rotator wrecker to pull up the bus and straighten it out. After this, the team could rig and block-knuckle the bus and get it ready for the crane.

The McGann & Chester heavy recovery team got straight to work. They attached the cables to the bus and used their 90-tonne rotator to pull the bus up and straighten it out. The team completed the first part of the job with ease. Now, due to the new position of the bus, the crane could access it much easier.

After the crane completed its job lifting the bus to safety, a sigh of relief was released from the whole team involved. A huge well done to everyone who participated in this mammoth job. We wish a safe recovery to all those injured. 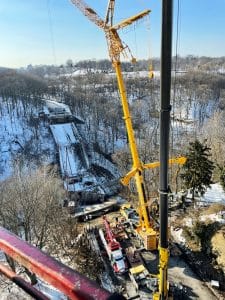