McGann & Chester responded to a call for a tow truck service after a Chevy Equinox got stuck on the train tracks in South Pittsburgh. The driver of the small SUV managed to drive up onto a track, getting his front axle stuck on it in the process! Unable to move his car, the driver was at serious risk of being hit by a train!

He immediately called the authorities who then reached out to McGann & Chester tow truck service. The towing service chose to use a 1-ton wrecker for this job as they did not have much room to maneuver on the tracks.

The Pittsburgh tow truck operator carefully placed planks of wood underneath the Chevy’s wheels. With the planks in place, the Chevy was able to be pulled onto the side of the tracks. The towing team then winched the car down the tracks until they reached an intersection to the main road.

Using the tow truck’s boom, the team lifted the rear end of the SUV into the air and carefully placed it onto the pavement. The vehicle was finally out of harm’s way and McGann & Chester towed the SUV to a nearby repair shop. 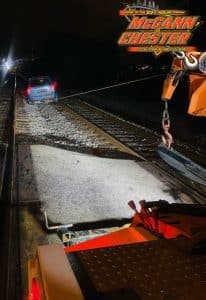 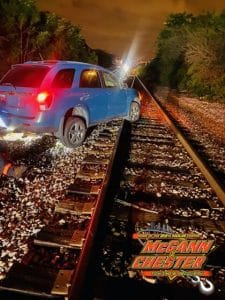 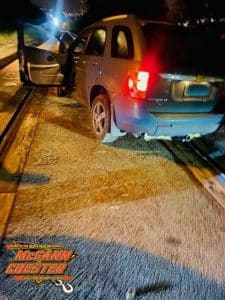 Once the SUV was completely on pavement, the tow truck service prepared to tow it to a nearby repair facility. They consulted with the driver of the Chevy Equinox and came to a decision together on where the SUV would be towed.